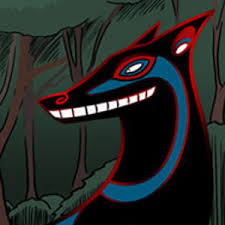 Age: As old as the universe

Powers and Abilities: High level reality warping, timestop, shapeshifting, immortality (possibly type 3. Not type 5 by confirmation from the author), possession (has said he can possess anything with eyes) and plant manipulation (he currently lacks these last two abilities since he gave them away to Reynard and Ysengrin although he can take them back at any time he wants to), can invade dreams

Attack Potency: Unknown, Moon level+/Possibly multi-solar to multi-galaxy, depending on how you interpret his feat of placing the stars in the sky

Speed: Superhuman+ (Has only one speed showing but neither the time or distance were specified)

Striking Strength: Class M+ (created a massive fissure separating The Court and The Forest by striking the ground)

Durability: Moon level+ (Transformed into the moon with little effort once)

Stamina: Bound to be extremely high, his form in the astral world seems to have no end

Range: At least to the moon/possibly universal depending on how you interpret him placing the stars in the sky

Intelligence: Highly intelligent. Given his age, he knows a lot about the GC universe, but is explicitly not omniscient.

Weaknesses: Terrible at poker. Doesn't make much of an effort to plan ahead, causing his plans to frequently fail, though he finds this just as hilarious as if they succeed.

-Coyote's Tooth: Taking a tooth from his own mouth, Coyote transforms it into a sword. He describes it as the keenest blade you will ever find, and it is indeed incredibly sharp, so much so that it can cut a shadow off the ground.

Retrieved from "https://fictionalcharacterbattles.fandom.com/wiki/Coyote?oldid=7017"
Community content is available under CC-BY-SA unless otherwise noted.