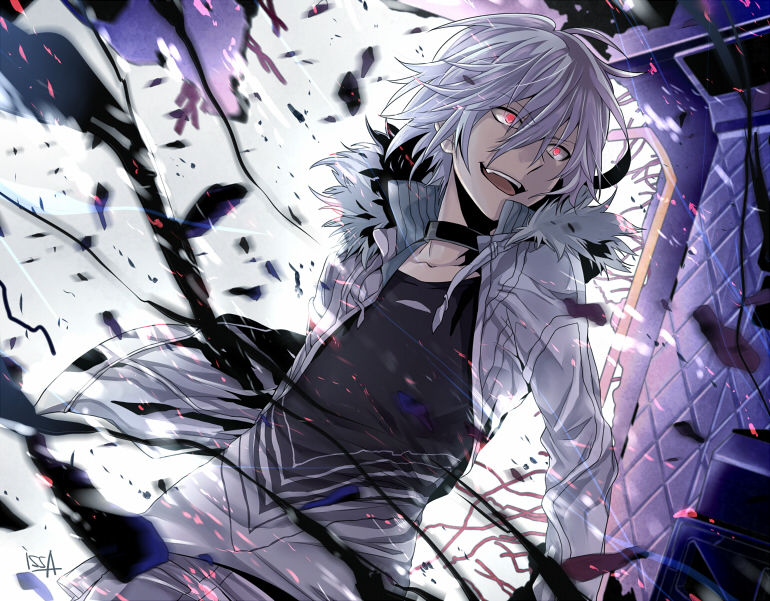 The Accelerator is the name used to refer to the 1st-ranked Level 5, the strongest esper currently residing in Academy City.

First appearing chronologically in To aru Majutsu no Index as an antagonist, he later becomes the second protagonist of the series and primary male protagonist of the Science Side after being defeated by Kamijou Touma. His journey to a more "heroic" role in the story progresses after meeting and saving Last Order, and is forced into an ironic twist of fate where his life now depends on the Sisters, clones he previously killed by the thousands. He is also a major antagonistic character in To aru Kagaku no Railgun and is the protagonist of To aru Kagaku no Accelerator.

In his role as a protagonist, he is forced to deal with the cruel Dark Side of Academy City, the secret conspiracies surrounding it, the guilt he carries from the Level 6 Shift experiment and his inner conflict about his status as a villain/hero. As the most powerful esper of Academy City, his existence and powers are tied to the plans of Aleister Crowley, the founder of Academy City, alongside Kamijou Touma.

Name: Accelerator, The One Who Wields the Power of God, The Main Plan, The Strongest Esper, #1

Powers and Abilities: The ability to manipulate and control any vector he comes in contact with, which applies in various forms, including: Superhuman Physical Characteristics, Passively redirecting virtually any vector-based attack back at his opponent, can Generate and Manipulate Wind, Can Generate and Manipulate Plasma, Limited Earth Manipulation, Flight/Levitation, Can cause dust Explosions/Blasts, Can manipulate the blood-flow of an individual, By touching an object he can extend the influence of his ability to other objects in contact with it (this allows him to indirectly change the vectors and turn the objects into projectiles), By redirecting the electrical signals of the human body he can take 'control' over them and rewrite the memories and personality of the target, by touching a person's body can rip off their skin instantly | Proficient Marksman | His Wings disintegrate matter on contact, Can manipulate vectors from a distance, Angelic Physiology

Speed: High Hypersonic+ with Massively Hypersonic reactions/close combat speed (he kept up with Gabriel and FUZE=Kazakiri during WWIII, fought and chased Salome), potentially Relativistic+, likely Speed Of Light (Via this calc)

Stamina: Superhuman, can continue to fight after severe injuries, managed to use his powers while unconscious after getting shot in the head to save his life and Yomikawa's, and also managed to continue attacking Aiwass after being nearly sliced in two by its wings

Range: A few dozen meters with firearms and standard vector attacks, possibly several kilometers with regular techniques, one planetary diameter to interstellar when using the Earth's energy and rotation. Varies with what vector he comes in contact with

Standard Equipment: None notable | Electrode choker, a modified crutch that lets him block electrical interference which may hinder his choker, a backup handgun

Intelligence: Supergenius (His intellect exceeds a hundred supercomputers. 's esper ability has been shown to require complex calculations to function, with him being skilled enough in this field to come up with a new application on the fly during his battle against Touma. He also appears to have a very good memory, as he memorized the codes for Last Order's default mind state and was able to remotely return her to that condition, thus erasing the virus planted into her by Amai Ao. Later, he also starts to display well-thought out strategies in battle, like when he was able to take out the Hound Dogs using guns, which he utilized for the first time against them, along with exploiting his immediate environment and psychological tactics to his advantage, without using his esper ability. Even with less than half of his calculation ability, it is great enough to allow to calculate and analyze all the 25,000 different kinds of energy of Kakine Teitoku's Dark Matter was emitting at once and updating his ability in order to reflect them, while fighting on par with Kakine and protecting the bystanders)

Weaknesses: Overconfident and sadistic | The electrode which lets him use his powers only has 30 minutes of battery | None notable | None notable

- (一方通行 (アクセラレータ) Ippō Tsūkō (Akuserarēta), lit. "One-Way Road"): The unique esper ability of the strongest Level 5, also used by as his name since he has forgotten his original name. It creates a thin field of AIM around him, which allows him to modify the vector values of anything he touches. While normally allowing him to manipulate physical vectors, it has been shown that it is more than that, through the use of 's massive intellect and calculating prowess, he has been able to manipulate vectors that were unknown to him and worked under different laws like Kakine's Dark Matter's, magic's or Telesma's.

- Angel Form: After developing/updating his powers and Personal Reality, has gained an unknown power and the ability to manifest wings that have been compared to an angel's wings.

- Magic:  has demonstrated the ability to use magic. In volume 22, he used his vector ability to interpret the song used by index to save Last Order and repeated the breathing method, casting the spell. As this was a pure magic spell, he suffered serious harm but saved Last Order.

- Marksmanship:  has been shown to be extremely proficient with firearms (in SS1). Even with only his weaker left hand, he was able to finish off a round of practice in 70 seconds. He has commented that reloading a pistol in two seconds with one hand is too slow for him, even though he was just testing the guns. As proven during his fight with Killer Point, can make impossible shots by shooting himself while he has his vector shield active, allowing him to take control of the bullet's vectors and gain absolute control over its path in the air, which he used to shoot Killer Point after he had taken an innocent hostage.

Retrieved from "https://fictionalcharacterbattles.fandom.com/wiki/Accelerator?oldid=13074"
Community content is available under CC-BY-SA unless otherwise noted.